You are here: Home / News / WW1 Centenary / Within the Classroom

Every year, from 2014 till 2018, as part of the build up to Armistice Day, students take part in the ‘WW1 curriculum experience’ where they receive a lesson on WW1 in different subject areas.

This year, similar to last year, faculties around school offered a wide ranging and comprehensive set of lessons and activities.

Y8 students read and performed the poignant words of Owen’s ‘Dulce Et Decorum Est’ and took part in a re-enactment.    One team performed to the rest of their year group so that students could reflect on the anguish, pain and sacrifice offered by the young men serving as soldiers during WW1. 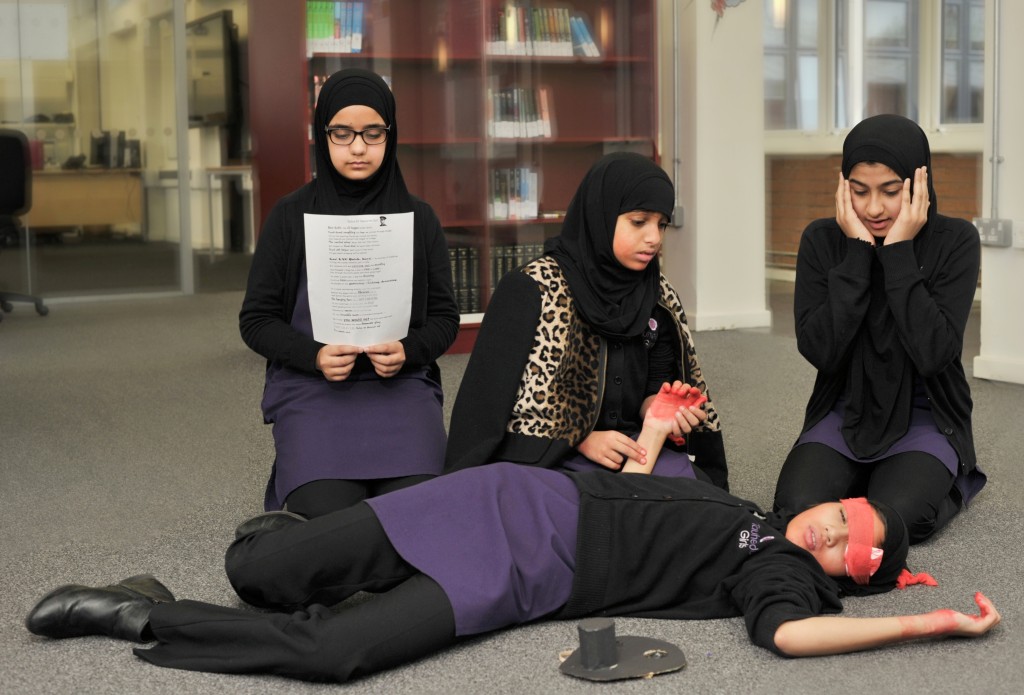 A soldier attempts to resuscitate his comrade whilst another looks on in horror.

Elsewhere, students look at how to create empathy and sympathy by studying war poetry, looking at individual voices, exploring patriotism and the abject terror faced by soldiers. Students describe the trenches in a writing piece in lesson. The unit will end with a ‘poetry by heart’ competition in the school hall. 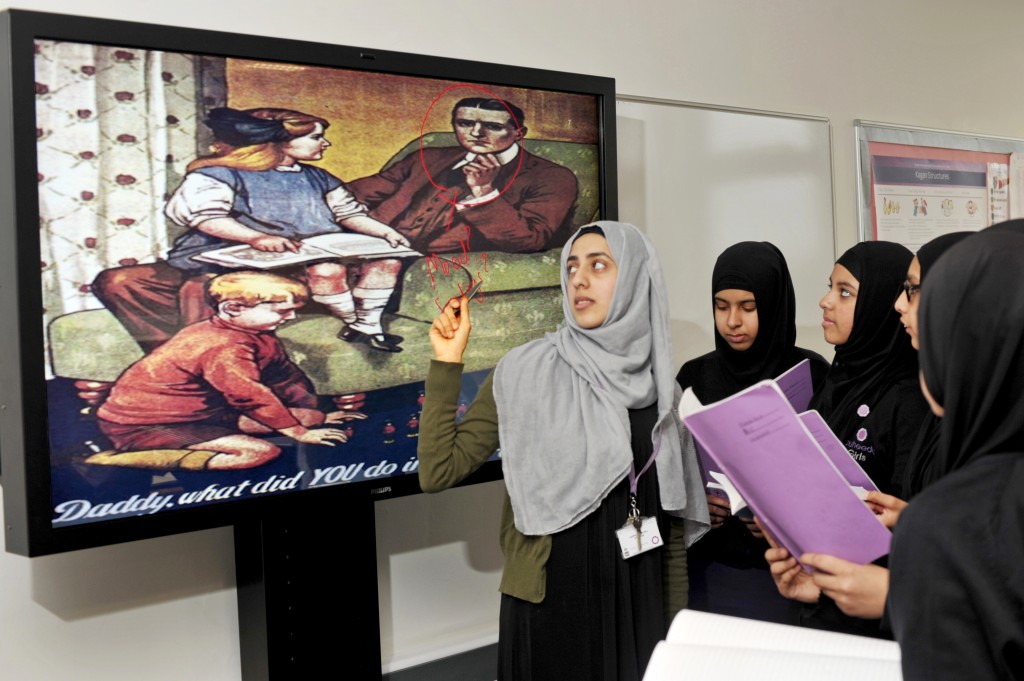 Imagine you are fighting on the frontline and miss home and loved ones. Well, that’s exactly what our learners are doing in Y9 in French, Urdu and Arabic. They are playing the role of soldiers in trenches penning notes and letters to family and friends in their Languages lessons. In French lessons, students also study a text called ‘la vie dans les tranchee’ (life in the trenches). 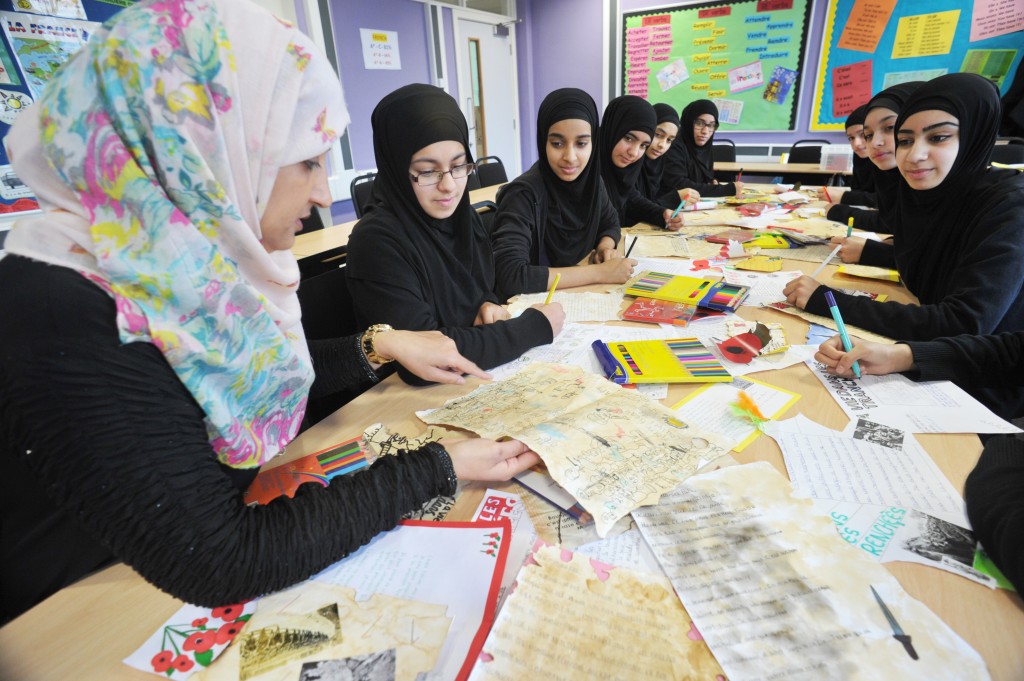 A French lesson where students write letters in French from the front line to loved ones back home.

As the saying goes, ‘an army marches on its stomach’, and a vital part of the Great War was ensuring that no man when went without food. In French, Urdu and Arabic lessons students create survival and ration packs and present these to the class in the target language. An exhibition of these survival and ration packs is displayed in the library for students, staff and guests to explore. 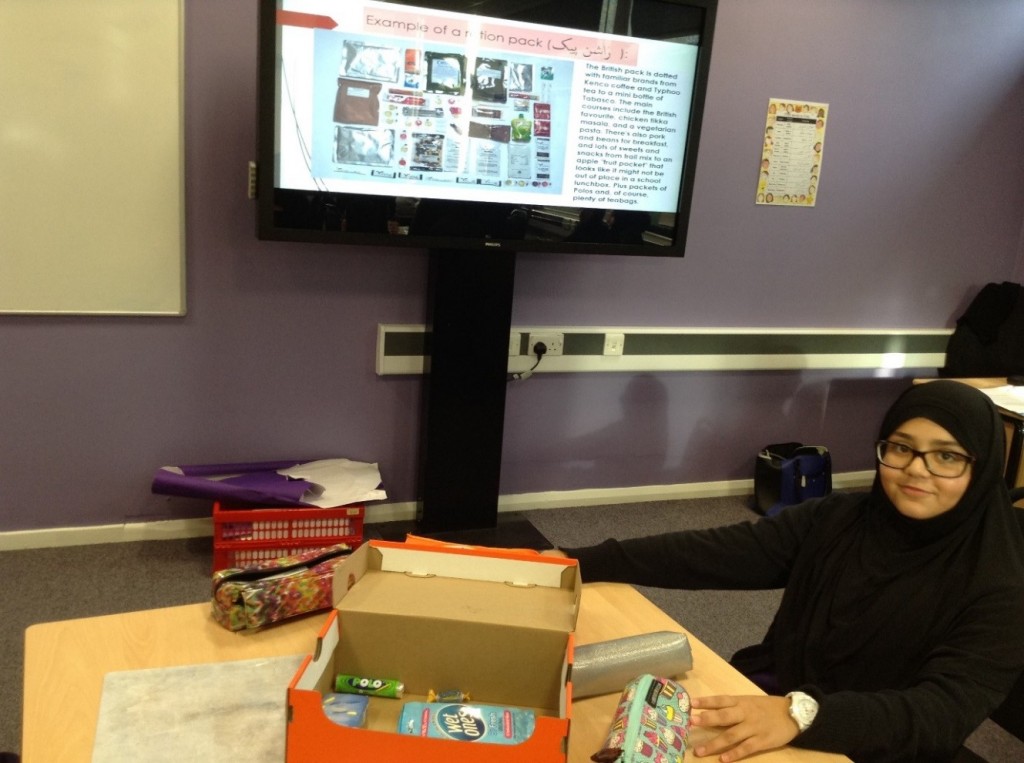 Y8 students make a ration box in an Urdu lesson. 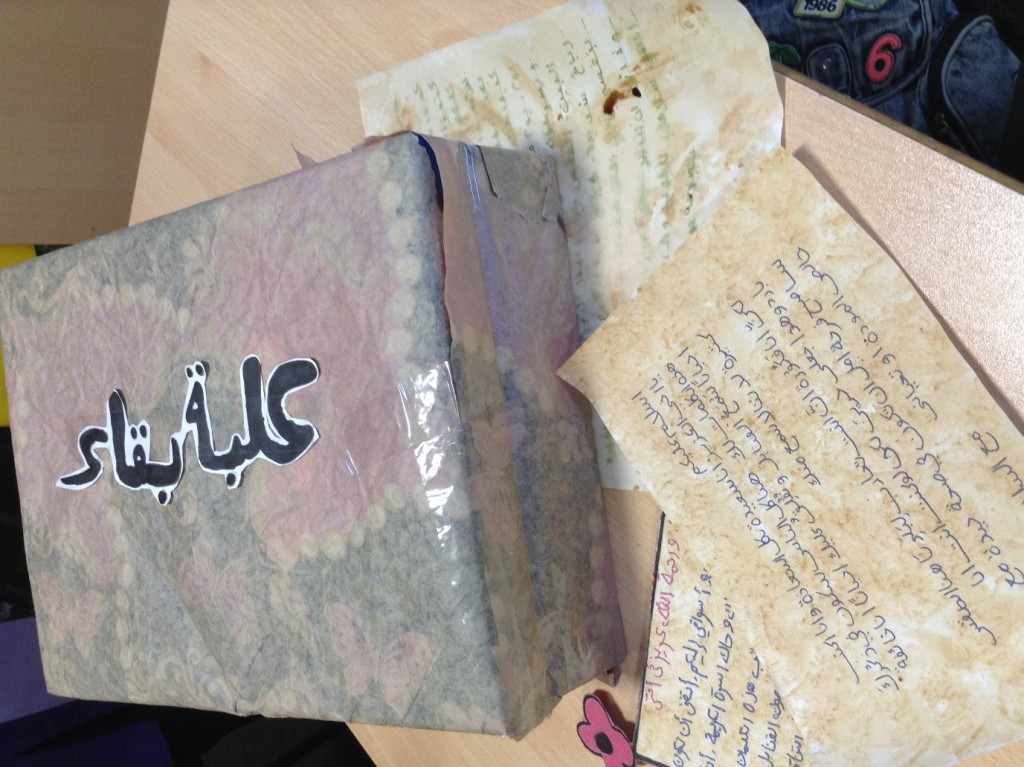 Arabic students write letters to loved ones to go into the ration box.

In Art, students used their artistic and creative skills to make a poppy unmbrella display. The aim of the lesson was to raise students’ awareness of the significance of the poppy. 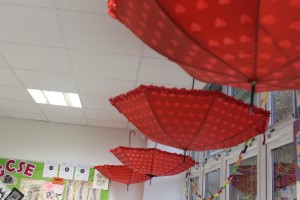 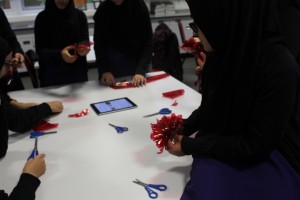 In Y9 and Y11 students put their artistic skills to good use and make poppies to mark Remembrance Day.

Students in History look into the role of propaganda and enlisting experiences during a lesson on WW1. 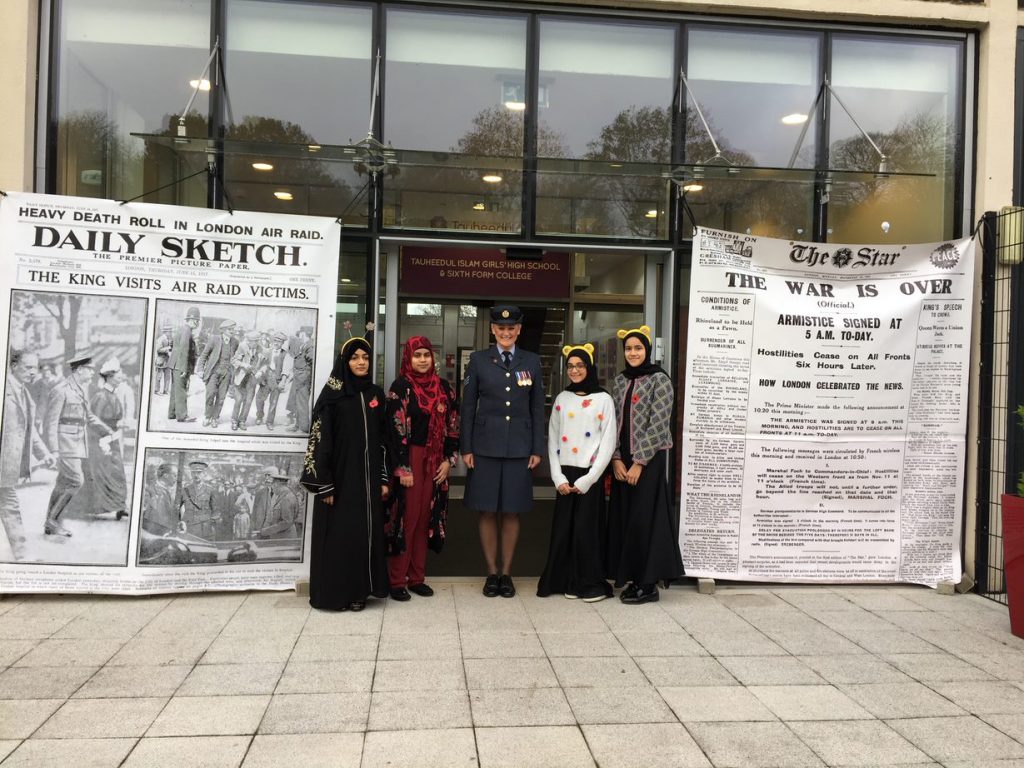 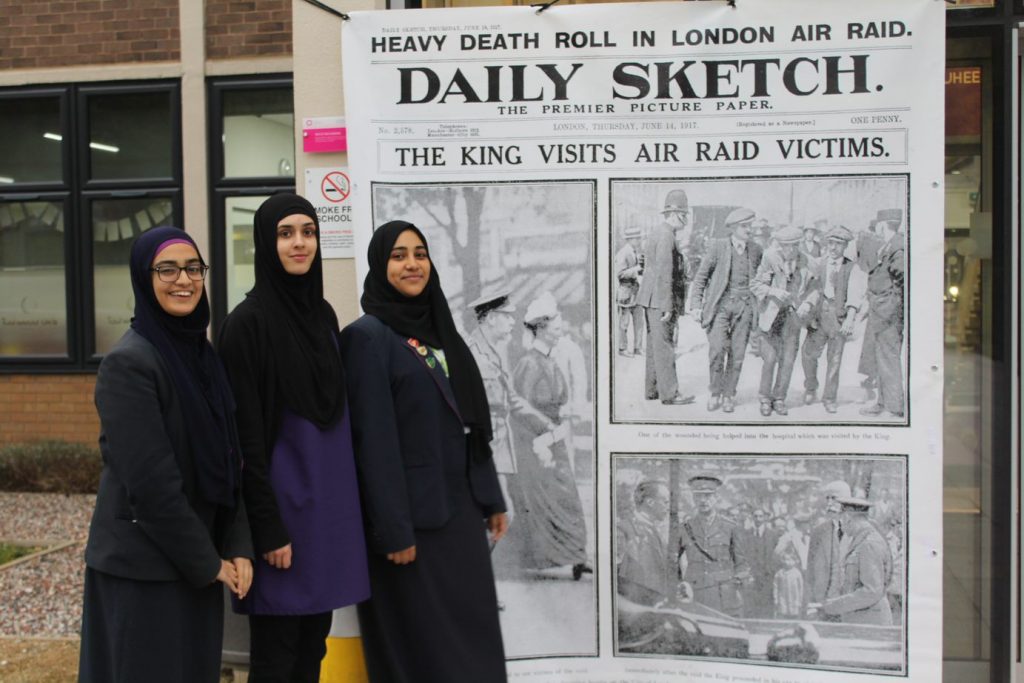 In Geography, students explore how WW1 affected the geography of Europe. They look at how conflict affects geography, for example through development, politics, health, environment, weather and climate. Students practise their map skills by studying the contrasting landscape of Europe before and after the First World War. They annotate maps to show the similarities and differences between them. They explore the question; how did the borders of Europe change after the First World War?

Some big issue and questions are explored in Citizenship lessons in relation to WW1. Students research and investigate the unsung heroes of the war: Women, The Friends, Ambulance Service and the First Moles. Pupils debate what a real hero is and explore the work of an individual/group that are unsung heroes, past or present. This led up to students designing a campaign to get a WW1 hero of their choice recognised.

Studying the concept of war: is it right? Is it wrong? This debate preoccupied students in RS lessons whilst the themes of conscientious objectors and pacifism is explored in Y8. 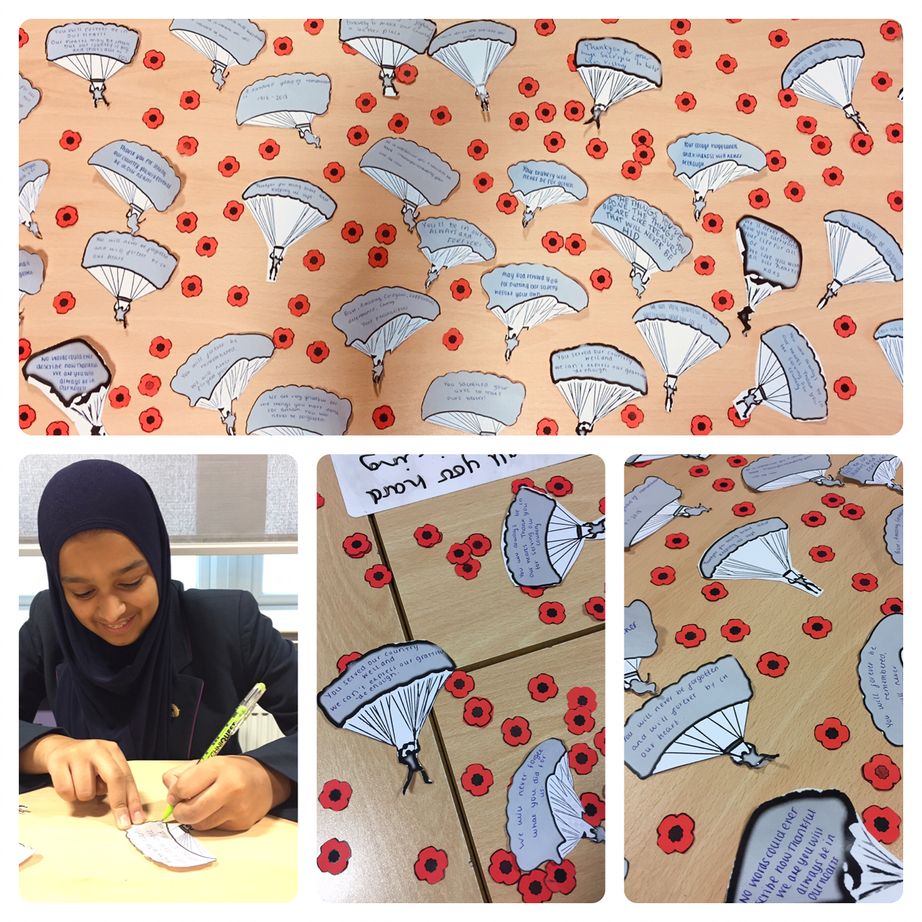 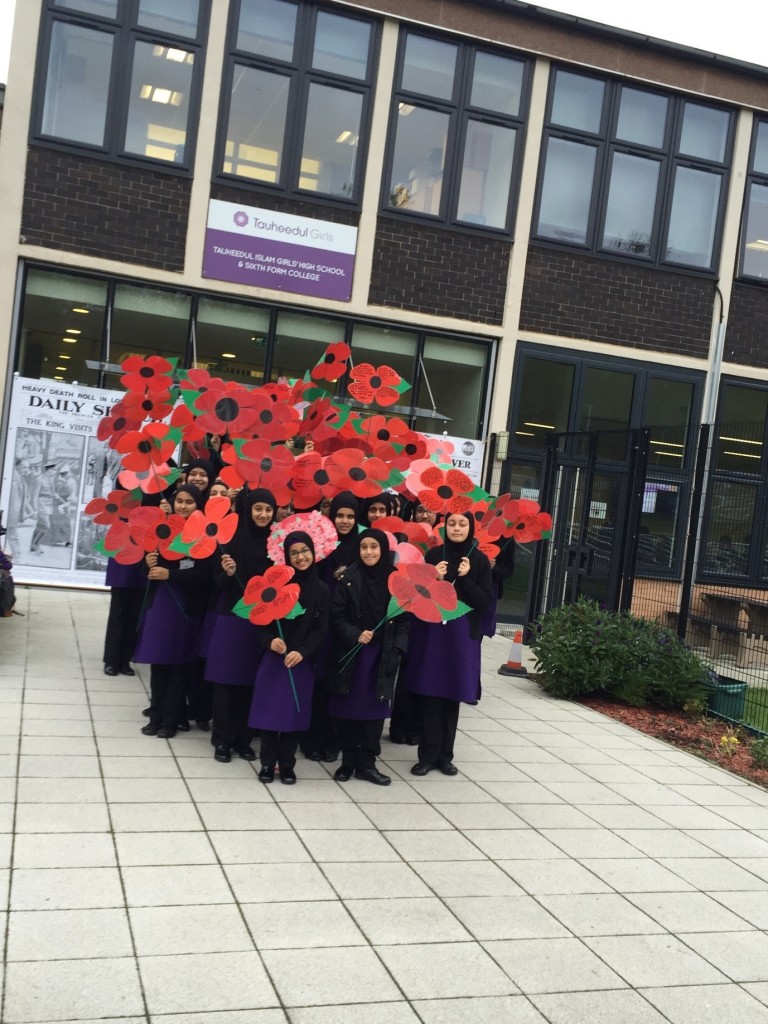 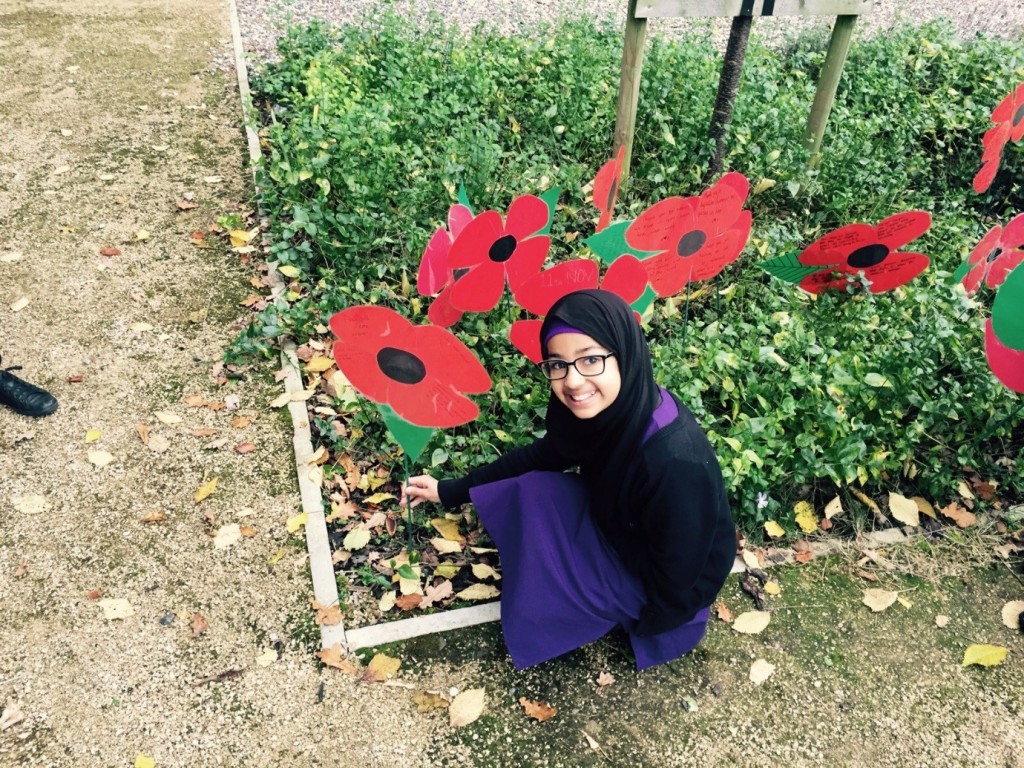 Students in Humanities lessons work together and write messages of peace and hope on poppies to ‘plant’ in the remembrance garden at the front of the school.

In Y11, pupils tackle and debate big questions around the war for instance: who made the biggest difference/sacrifice? What was the role of Parliament in the outbreak of the war? Was it the involvement of the suffragettes in the war that helped women gain the right to vote? What is the legacy of WW1 for women today? Do we have a responsibility to remember? Students are challenged to apply what they learn to their role as British citizens in the world today.

Students learn what Mathematical skills are required for code breaking and how useful this was during WW1. This is followed by a code breaking activity where students used problem solving skills to share secret messages. 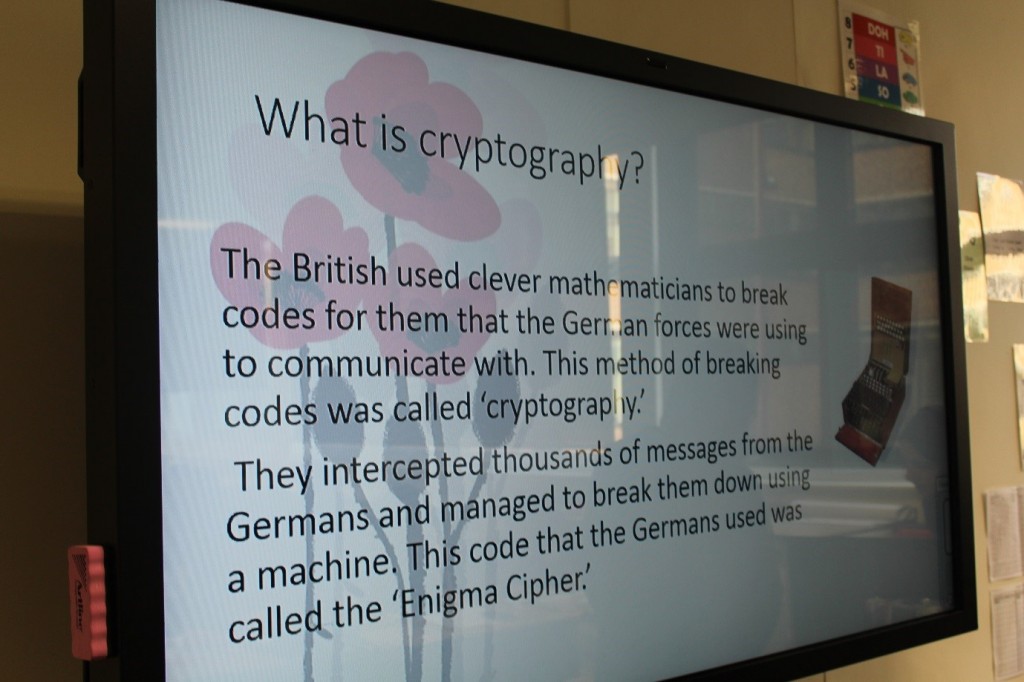 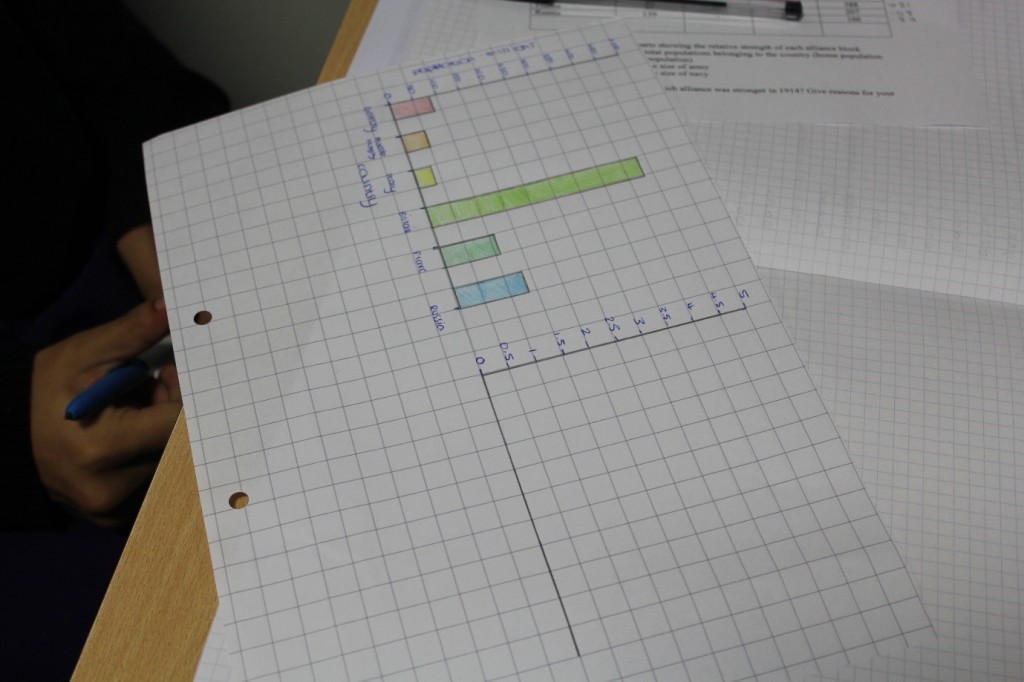 In Y7, students are introduced to the Alliances. This is followed by a discussion about the size of army. Students then make bar charts and use data handling techniques to present a comparison of military capabilities. 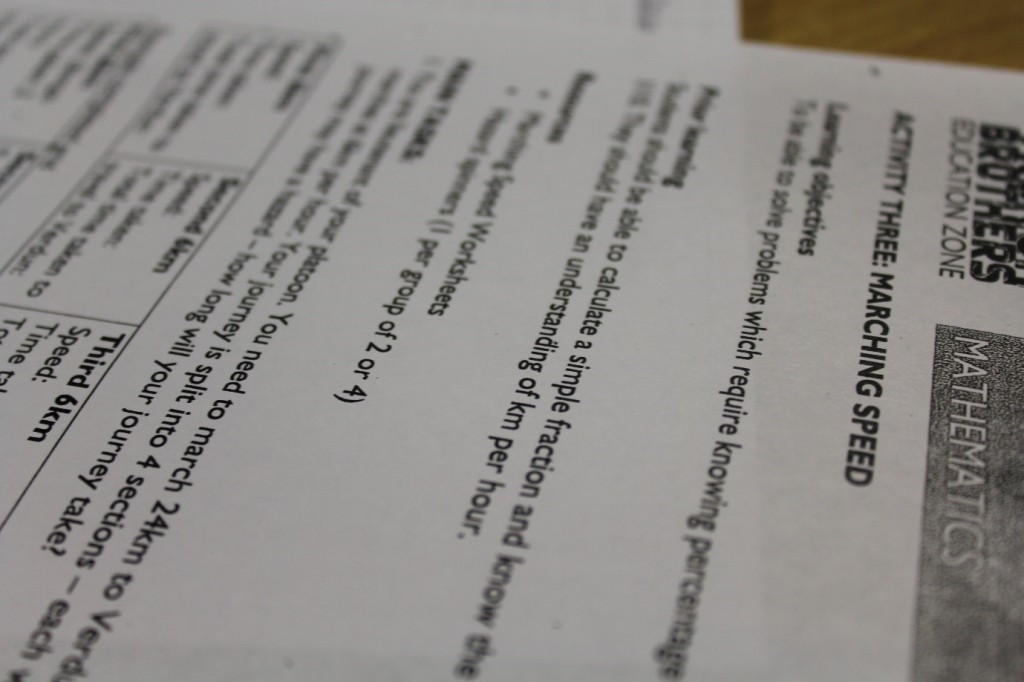 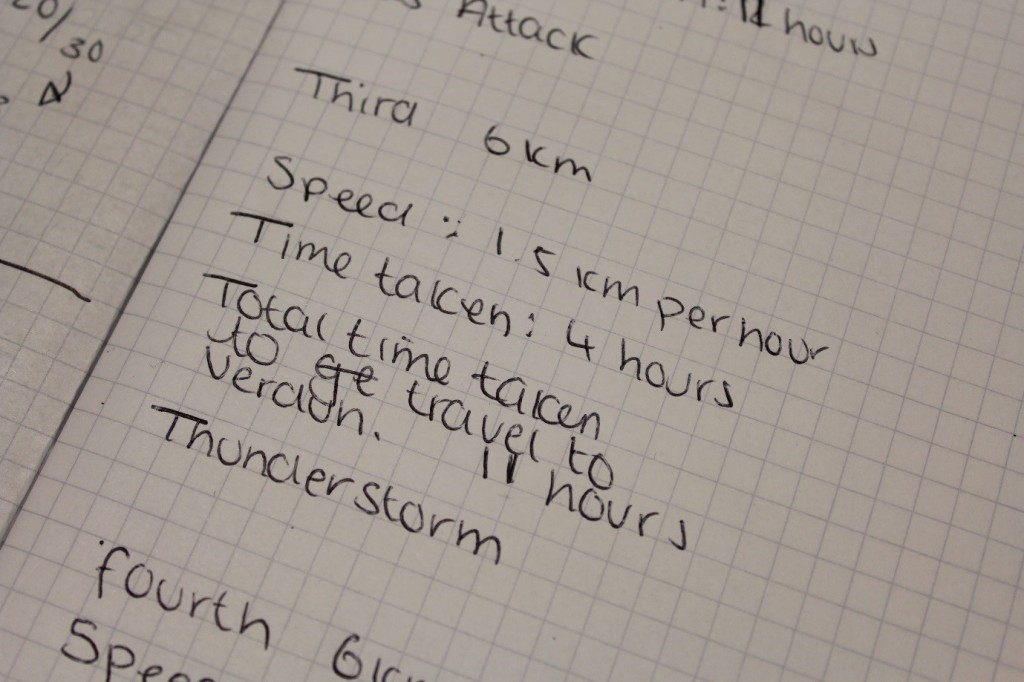 In Y9, Mathematical knowledge of fractions, decimals and percentages were used to calculate the time it took a platoon to reach their destination.

Imagine a world with no internet, no global communication network and no 24 hour news channels. In ICT, students explore different communication methods that were used during WW1. Communication was vital on the World War I battlefield, and when it broke down the results could often be fatal. Units at the front line needed to know where their neighbours were, while commanding officers working behind the lines could only control their men if they had a reliable source of information. Methods such as telephone, radio, visual communication and even pigeons are explored. Y7s create secret messages using binary and encryption code.

In Science, students explore the human body at War by reading the diary of a soldier and how infections affected the body, use of disinfectants, dressings and bandages on the battlefield during WW1. In addition to this, students research different conditions suffered in the war including septicaemia, gassing, shell shock, trench foot, trench fever and body lice. They explore and analyse the effects of these conditions on the body.

Students study terminal velocity including the use of parachutes in WW1 in their Physics lessons. 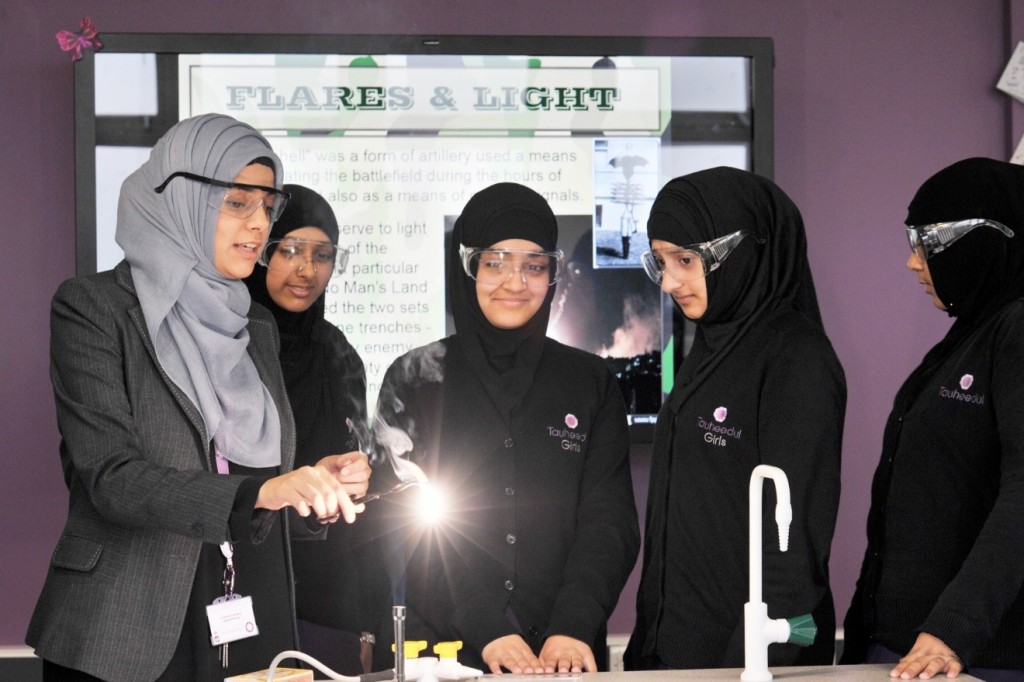 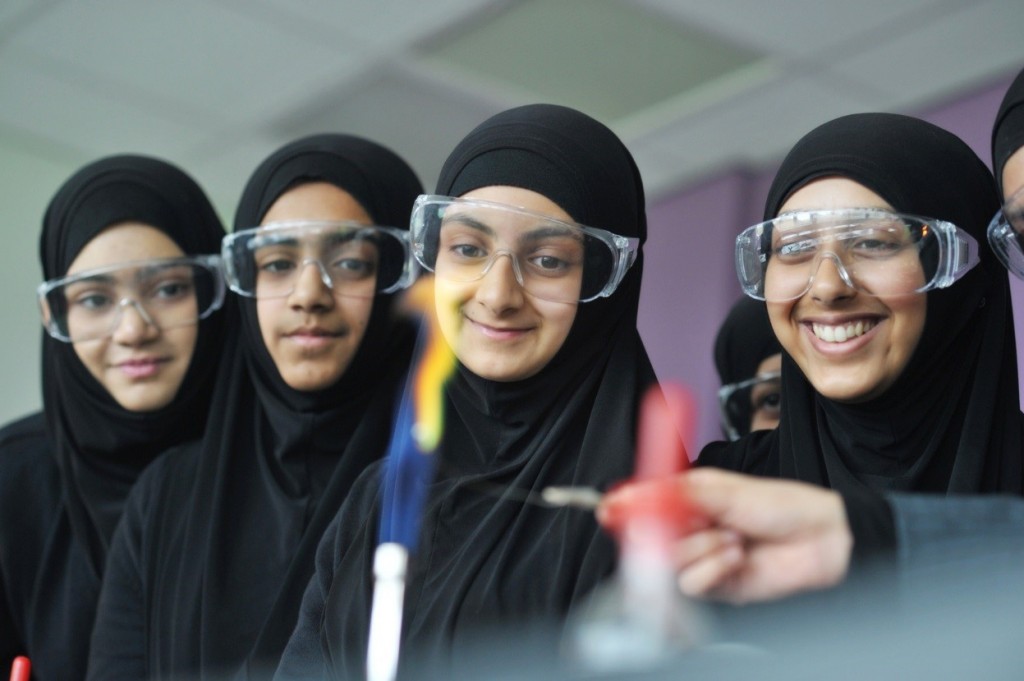 Students experiment with flares and gases used in WW1. 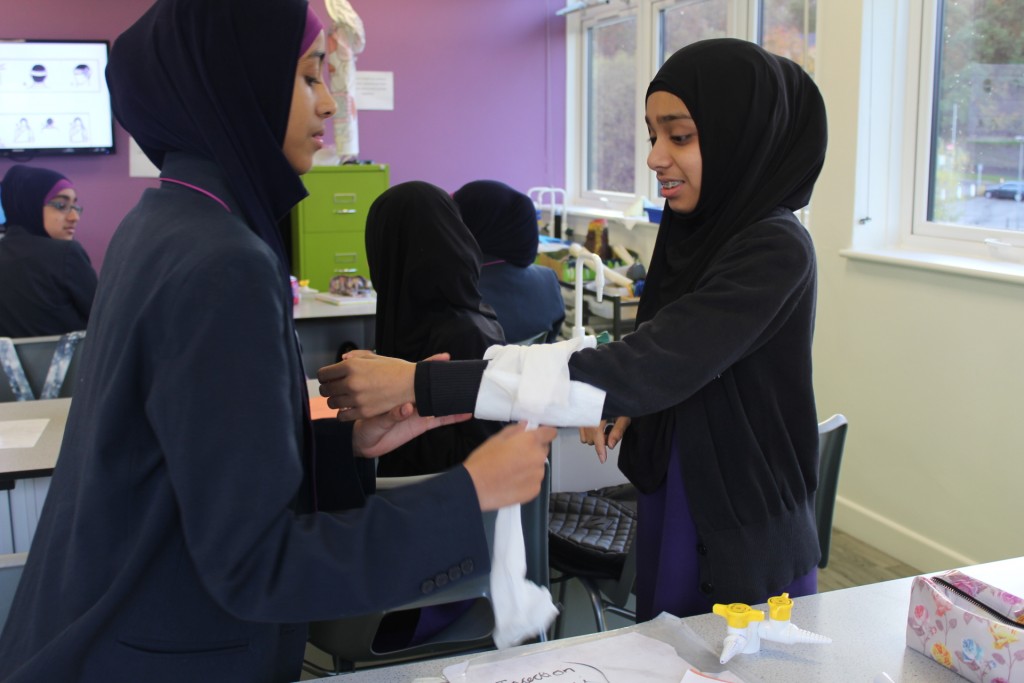 Learning how to bandage a wounded soldier. 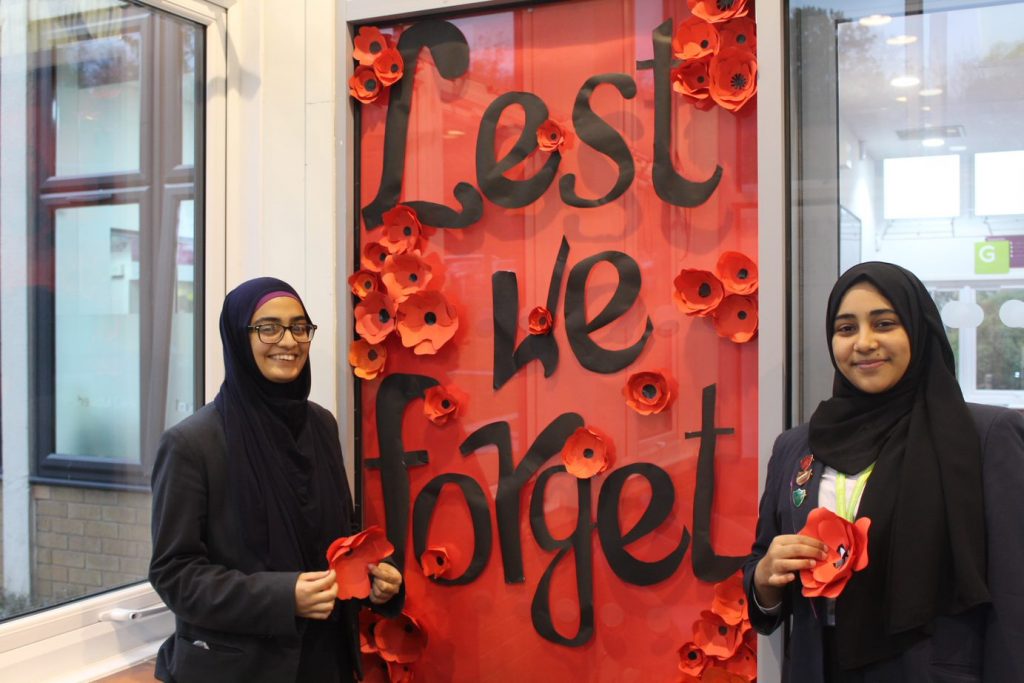